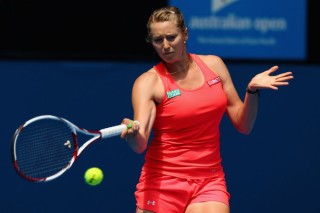 Every Grand Slam brings out new outfits for players to wear.  From time to time we have some classic pieces that are never worn again and which fans the world over rave about in social media.  One of these was Serena’s dress at the 2012 French Open.  Beautiful green colour and it fit very well.  Unfortunately, fans only got to see it for one round as for the first time, Serena was ousted in the first round of a Major.
However, there are the outfits that defy description.  During the next 2 weeks Overhead Spin will choose one outfit that is based on how many comments it garners on social media and post the outfit with the caption … What were you thinking?
The outfit that garnered the  most comments on Twitter last night was that worn by Olga Puchkova, a Russian who was playing fellow Russian, Sharapova.  Pouchkova, not only had everything go wrong with her game last night, but her outfit was described by many as a cross between sleepwear and as one fashonista tweeted “is this a onesie?”
Here for your viewing pleasure is Puchkova in her definition of tennis gear. While this picture does not make the outfit look too bad, it is when Puchkova is in full flight, or indeed is stationary that the real disaster of the outfit comes into full recognition.
Do you think this outfit was the worst of Day 1?  Sound off