Skip to content
We started with 128 players. We had qualifiers, wild cards and direct entrants.  At the end we are left with 4 women who could walk away with the title of US Open Singles Champion 2013.

First up is Flavia Pennetta.  At this time last year Flavia was home in Italy recovering from wrist surgery.  At the beginning of the year she contemplated retirement at the end of this season because her results were so poor.  At 31 years young, Flavia is into her first Grand Slam semifinal.  Her road to the semifinal included wins over 2 time Major champion Svetlana Kuznetsova, countrywoman Roberta  Vinci and the hottest player of the latter part of the season, Simona Halep.  Flavia goes up against the World No. 2 and 2 time Major champion and last year’s beaten finalist,  Victoria Azarenka. 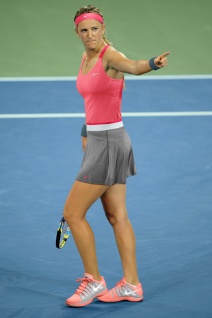 Azarenka has not had an easy time of it.  She has struggled throughout this tournament, playing back to back 3 set matches against inspired opponents Alize  Cornet and Ana Ivanovic.  She had a routine win over Daniela Hantuchova in the quarterfinals but again her serve, which has never been her biggest weapon failed her when called upon to do duty.  Azarenka has got to the semifinals through grit and just plain cussedness.  She just refuses to lose.  She will have a battle on her hands with Pennetta who will be playing as if she has nothing to lose.

The head to head is 1-1 with Azarenka winning on clay and Flavia on hard courts.  They have not played since 2011.  I think this is going to be an exceptionally tough match for Azarenka just because Flavia did not know  she could get to this point in her career.  Now that she is here, she will want to go one step further.  If she is ever going to get to a Major final, now is her chance.  However, with the grit that Azarenka has shown this tournament, she will be battling long and hard to ensure that she makes another US Open final with hopes of walking away with the trophy.

The second semifinal features the No. 5 seed, Azarenka.  She looks fit and focused and her game has taken on a new dimension.  She is playing much closer to the baseline, her serve has improved and she has been coming to net on almost every point.  She battled hard in her match against Makarova and her lapses during that second set cannot happen against the player that she is going up against, that would be Serena Williams.

Na Li .  By all accounts Li has not had a successful season.   She made the final of the Australian Open and won a small tournament in her native China.  However, for most of the season she has been battling an ankle injury that she suffered during the Australian Open final against

Both ladies played recently in Cincinatti with Serena coming away with the win.  During that particular match Li showed off some of her serve and volleying skills but as the match wore on she abandoned that particular strategy and went back to basics.  Neither strategy worked effectively against Serena.

Serena Williams has looked unbeatable during this tournament.  However she is doing doubles duty this tournament and her play the last two times I have watched her in doubles seemed a tad lacklustre.  It could be that she was conserving energy, but Venus has looked the more formidable of the two on the doubles court.  That being said, in her round of 16 match against Sloane Stephens, especially the second set, as well as her quarterfinal match against Suarez-Navarro, we saw vintage Serena when her game is firing on all cylinders.

Serena does not underestimate any opponent and I am sure she will be reminded of her match against Li a few weeks ago.