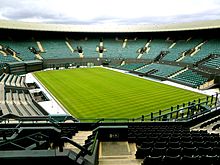 Each year as I type those words I get goose pimples.  It is the only tennis tournament where I rarely post, because I just want to enjoy the tennis. This year will be no different. I know that there are a lot of stories out there, not least of which is the fact that Serena Williams was awarded a seeding, supposedly at the detriment of Dominika Cibulkova.  I don’t know if this is true or not, but word is that Cibulkova is not the happiest camper out there.  That was always going to be the case in this situation, which is why I have always been against this seeding issue.  Frankly, there did not need to be a huge media campaign about awarding Serena a seeding.  Let Wimbledon do what it normally does. Not only did this whole maternity leave situation get blown out of proportion, but it now comes across as Serena asking for preferential treatment.

The WTA did not have a policy and I suspect now they do have a coherent policy on how to address the issue of players returning from maternity leave.  As the longevity of careers is now cemented in tennis culture, it is now important for the WTA to look at other aspects of the players’ career (or rather for players to work in conjunction with the WTA to explore options for the working mother, similar to other organisations).

Professional sports has always been a different work culture than other organisations. WTA players as we are often told are independent contractors.  They determine which tournaments they play.  They have their own teams.  I am assuming they determine their work contracts.  As such, an issue such as maternity leave, as well as sick leave (injuries I suspect) should now be embedded as part of the arrangements between players and the Tour.

Anyway onwards to the tennis:

I am looking to see quite a number of players do well at this year’s Wimbledon.  I am yet to look at the draws (or listen to the Realz podcast) but I am sure that Venus got a crappy draw, but I would be glad if she at least defends her points from last year.

I have been enjoying Sabalenka this grass season.  Wozniacki looks good as usual in the lead up tournaments to  Grand Slams.  Its good to see Radwanska back on the Tour, but I am not holding out much hope for her.  Ostapenko after her debacle in Paris looked strong, except when she didn’t.  I see that she has been working on her second serve but the over hitting which was a hallmark of her career a few years ago, seems to have returned in spades.

Muguruza has been MIA, so too has Sloane Stephens, Madison Keys and Coco has not done well this grass season.  Donna Vekic should make some moves during Wimbledon as she loves the grass and she has been playing well.

Of the youngsters, I am looking to see how the following players do.  They have big games and they have been making big moves this year:-  Vondorousa, Diatchenko (who has a first round match against Sharapova), Sasnovich (who plays the journalist’s pick to win, Petra Kvitova), Osaka (who has drawn the worst player for a young player in Niculescu).

First Round matches to Watch

Hseih v. Pavylyuhchenkova (come for the spins, stay for the volleys)

Halep v. Nara (Halep could be upset if she is not careful)

Cornet v. Cibulkova (if only because their matches are always dramatic)

Collins v. Mertens (Collins is having a bit of a slump after her heroics on American hard courts.  Mertens loves this surface and has done well here)

Enjoy the tennis everyone

Tennis fanatic, but mostly women's tennis ... scratch that I am all about women's tennis. House Stark. Loves reading, cooking and frankly love watching tennis. Listens to Alanis Morrisette every chance I get View all posts by overheadspin