Just how great is Serena Williams these days?  She won her 17th Grand Slam title from 53 appearances. To show just how good she has been and still is, Martina Navratilova played 67 Grand Slam singles events and Chris Evert played 56.   They both have 18 singles titles.  Serena is one win away from tying them.  Most people think that it will happen at any of the 4 Grand Slams next year. 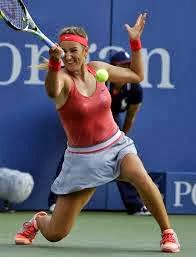 For the second year in a row, Victoria Azarenka has shown that she is worthy to be called a rival of Serena Williams.  I am not minded to call her that having regard to their head to head, but Azarenka makes a very good case as to why she should be called a rival to the woman who now occupies the WTA Penthouse.  She has shown that she has the game and the mentality to stay with Serena come what may.

Here are Spin’s and Ace’s Parting Shots.  As with most of the Majors, the Spin will focus on the women and in no particular order of their importance.

The WTA Tour now moves to Asia and already we have seen some surprising results.  Spin had a chance to watch a few matches from Korea as well as China.  I watched the semifinal match between  Zhang and Meusberger.  It was my first time watching Zhang, a WC recipient play and I was very impressed.  I am thinking from the little that I have seen, plus the fact that her opponent, Vania King, a qualifier had to go 3 sets to take out Jheng Jie in her semifinal, will have Zhang winning her first WTA title from as many starts.
Ace’s preview of the Japan Open is below
Since the United States Open has concluded, the tour has moved on to the continent of Asia. This week the tour lands in Tokyo, which is hosting a Premier 5 event for the last time as it will move to Wuhan in 2014. Serena Williams was scheduled to play but withdrew due to fatigue. Also, Maria Sharapova, Sabine Lisicki, Nadia Petrova, 2012 champion, and Maria Kirilenko has withdrawn due to injury. Top seed is the reigning two-time Australian Open champion, Victoria Azarenka, who has defeated S Williams twice on hard courts in Doha and Cincinnati. Azarenka will be the favourite to win.
First quarter – Azarenka leads this quarter but her first opponent could be Venus Williams. Sloane Stephens will be trying to improve her record in WTA tour events in a push to finish 2013 in the Top 10 while Jelena Jankovic will be continuing her good play.
First round matchups to watch: Eugenie Bouchard vs Monica Puig
Second quarter – Sara Errani leads this quarter but admitted that the pressure of being a top seed got to her during the US Open. Petra Kvitova has the ability to win this title but she can be very inconsistent and will her love for Radek Stepanek, who won the US Open doubles with Leander Paes, linger on every match she plays.
First round matchup to watch: Julia Goerges vs Sorana Cirstea
Third quarter – Caroline Wozniacki leads this quarter and has won this title in 2010. She has a tough first round match playing the winner of Daniela Hantuchova/Flavia Pennetta. When the media thinks that Roberta Vinci will falter early in draws, she finds a way to make quarterfinals or semifinals.
First round matchup to watch: Daniela Hantuchova vs Flavia Pennetta
Fourth quarter – Agnieszka Radwanska leads this quarter. If A Radwanska, who won this title in 2011, is playing in Seoul on Sunday, she will have only one day to travel as her first match will be on Tuesday and the further she advances, she may feel the effects.
First round matchup to watch: Aleksandra Wozniak vs Francesca Schiavone
Ace’s Tokyo Predictions
Q1: Azarenka vs Stephens
Q2: Cirstea vs Kvitova
Q3: Vinci vs Pennetta
Q4: Ivanovic vs A Radwanska
S1: Azarenka vs Kvitova
S2: Pennetta vs A Radwanska
F: Azarenka vs A Radwanska
W: Azarenka

Tennis fanatic, but mostly women's tennis ... scratch that I am all about women's tennis. House Stark. Loves reading, cooking and frankly love watching tennis. Listens to Alanis Morrisette every chance I get View all posts by overheadspin