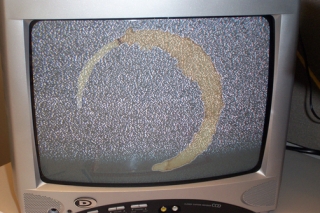 The  screen up top is what greeted millions of fans of women’s tennis the world over today when Caroline Wozniacki took the court against rising German star Mona Barthel and Serena Williams started her match against Anastasia Pavlychenkova.

Fans were eager to see how Wozniacki, who injured her ankle on the first day of play would do against the big hitting German star. Pavlychenkova, even though she was currently in a slump, having only won 3 matches this season, pushed Serena hard at the 2011 US Open, so fans were understandably eager to see how these 2 matches would fare. Unfortunately, there was absolutely no coverage to be found of either of these matches.

Prior to today’s debacle, yesterday, Venus Williams, she of the Sjorgen’s Syndrome, who is trying to raise her ranking to compete at this year’s Olympics at her favoured tennis site, Wimbledon, played another up and coming young German in Angelique Kerber. In addition to that match, 2011 US Open champion Sam Stosur was pushed to 3 sets by promising young American Christina McHale. Again, fans the world over were denied access to either of these matches. To compound the situation, I understand from veteran journalist, Matt Cronin that none of the journalists on site in Madrid chose to request an interview with Venus after her loss (but more on that in another post).

I started this blog in 2009. Since I began writing, the majority of my posts have  been about the fact that the women’s matches at these combined events are usually sidelined in favour of some of the more mediocre men’s matches. It pains me to say this, but there are only 4 men in men’s tennis. The storylines are the same tournament in and out. It gets even worse  during clay season as apart from the anomaly that was Novak Djokovic in beating Nadal on clay last season, the story lines have remained the same. There are 9 Masters events, and no one outside of the top 4 have won any of them dating back to Soderling’s win in Paris, Bercy in 2010. Despite this, at every combined event, from here to eternity, the women are constantly pushed into the background or, even when their matches are scheduled for the tv viewing audience, it is early in the morning to empty stadiums.

Many fans forget the heady days of the early 2000s when the men’s tour was headed  by a No. 1 who decided that the best way to go about the Tour’s business was to sue a body that was virtually his employer. In those days when Venus, Serena, Martina, Lindsay, Jennifer, Justine and Kim ruled women’s tennis, when ratings for the early rounds of the women’s matches were drawing big numbers, the ATP approached the women’s tour to try and ride on the coat-tails. Today, it is the WTA, who while not riding on the coat-tails of the ATP, seem to not understand that they have an audience of millions who are dying to spend money to watch the women of the Tour play.

At last year’s Wimbledon, unless you were an ardent fan of women’s tennis, you had no idea who Petra Kvitova was. Commentators were at pains to try and find information about her to relay to viewers. Apart from her semifinal match against Azarenka, Kvitova never made it to ESPN2/NBC’s broadcasts of the early rounds of Wimbledon. Fans knew who she was and of what she is capable. Fast forward to this year’s Australian Open and the commentary that accompanied Azarenka’s her triumph  Melbourne Park had more to do with her emotional and injury meltdowns of the past and not with her maturity and the strength of her game and how she commanded the court in her first Grand Slam final.

As a result of the negative commentary on women’s tennis, the shrieking, the fist pumping, the so-called WTA Rules as opined by Juan Ignacio Chela (more on that at another time), fans of the women’s game are not being given equal measure. We have been informed that the 4 top men of the ATP met with the organizers of the 4 Grand Slams to discuss prize money increases. They suggested and this was later adopted by all 4 Grand slams that any increase in prize money should be given to the lower ranked players.

When Venus Williams met with the All England Club in 2007 she spoke eloquently to them in relation to her case for equal prize money. She would later go on to win the whole thing. I would really love if Venus, Serena, Sharapova and the many other women of the WTA who have millions of fans worldwide and who dominate social media with their presence could find a way to approach Tennis Channel, ESPN, Eurosport and any other media entity to have some form of partnership with the WTA in terms of media coverage for matches. Perhaps, like the ATP, the top women, whose matches already receive lots of media attention, could perhaps allow fans to see lower ranked players or even to have some kind of partnership where fans would pay to see the women at these combined events.

Fans of the women’s game are disgruntled. There were many tweets from journalists, coaches and many others complaining about the lack of coverage of the women at this year’s Madrid tournament. As I said on twitter, it makes no sense for the Darren Cahills of this world to tweet their displeasure at the likes of me. Cahill and others are  in a position to bring their views to the powers that be. I am sure that he, and many others like him were inundated with tweets from many fans today expressing their displeasure at the fact that only 2 matches for the women were shown.

As to Tennis Channel, why I continue to spend  money to have this channel is beyond me. On some level it is the only way that I get to watch tennis, especially where I am located. As I subscribe via Dish Network, and as I had to install an extra satellite dish just to get the damned thing, I am stuck like chuck.

I, as an ardent fan of the women’s game am sick and tired of not being able to watch the matches that I know can be shown. It is time for fans of the women’s game to stand up. Perhaps a twition to the players on twitter as well as the media houses on twitter to let them know just how unhappy we are with the lack of coverage of the women’s events at these combined events. Lest anyone forget, women’s tennis is the largest global sport for women. It is time that the women of the WTA recognize their power and start wielding it. In another 2 weeks we will head to Rome, another combined event. Something tells me that if we stand up and fight, maybe, just maybe, things will change. Until then …